A Rose and County for Indraksi Ani Aravinda

It is obvious that in the elemental world there is nothing more magnificent and noble than the precious existence of monarchs, on whose high mindedness the external order of the world depends.  It is certain that to entrust a world to one person and to place the affairs of the world in the hands of one individual is to put the world of meaning to her, or rather to create the soul of the world of meaning - particularly a monarch who can detect whiffs of breezes of spiritual spring and grace the throne of success, who has attained a higher rank and has become a painter in the studio of meaning, a host of the banquet of reality, an intimate in the private apartments of the visible world, and a confidant in the pavilion of unity, and who graces the throne of felicity with good fortune.

Be it known by these letters patent, read into the court of Sultan Mohammad Al Wajdi Al Abderrafi Al Manil Ibn Horrah Ibn Gowan and Brenhines Corotica merkka Senebelnae, on October 1, AS 57,that the person known as Indrakshi Aani Aravinda is to be inducted into the Order of the Rose, and then the felicitous title of Countess, which she shall bear in honor as long as the moon waxes and wanes.

This scroll has been a dramatic little pain in my tuckas.

I discovered the existence of a Persian firman concerning how to treat the exiled Emperor of India Humayun while he was travelling in Persia. The entire thing was said to be contained in Abu'l-Fizal's Akbarnama, so I ordered a translated copy from a used bookstore in India. And then realized it would not be here for 3 weeks, after the scroll text was due. So ordered another copy from Amazon, which showed up within 24 hours. But volume 1 ends in 1542, and the Farman dates from 1543. I needed Volume 2. Swearing, I begged Magistrar Gunᵭormr Dengir, who works for Harvard University, to go dig up a copy of volume 2 and scan the pages I was looking for.

Now, I have a lot of experience with Turkish firmans/farmans, but the Persian one bore no resemblance to the format I was used to. There was no way to take the primary text and turn it into a recognizable scroll text which adhered to East Kingdom expected format.

In desperation I went back to the original text and found a section where Abu'l Fizal was waxing poetic about how wonderful Emperor Akbar is.

I changed the gender, and deleted some stuff about divine assistance and passed it off to the translator, Sara al-Garnatiyya of Meridies. ... who needed a month to translate it into Arabic.

Then... FOR ONCE! I had a genius idea. The copy of the book I ordered from Amazon had English on one side of the page, and Persian on the other. I took photos of the text and asked Sara if that would speed things up.

For a terrifying moment I realized that she had offered to translate it into Arabic, and the text was in old Persian in Naksh script, the language of the court of Akbar, Humayun's heir.

But Sara is a Goddess... she speaks enough Urdu & Farsi herself to be able to take this antique text and do the entirety of the second paragraph, and she got it done in a weekend.

The Inspiration scroll the Illuminator was working from. 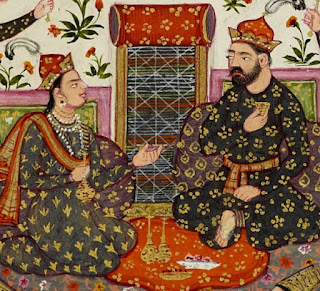 Popular posts from this blog

March 30, 2021
And so she navigated to our shore,  Fair winds had brought her safely to the East, She’d carried brushes, paints and clever lore, With Winston, truest friend and feline beast. Then once she’d found a land with opened doors, She made, for friends and Kings, her art into a feast. This is the land for which she’d ever longed; The sweetness of a home where she belonged. Thus, at the Sixth Ethereal Court of the Eastern Consuls of the East, Tindal and Alberic, do induct Cezilia Raposa into our Order of the Silver Brooch.   ---------- This is a scroll text for one of my dearest friends, Cezillia Raposa.  The scroll was illuminated by Mistress Nataliia and the caligraphy was by Baroness Faeillin, who has since become the Signet of all the Eastern Scribes (a kingdom level job).  This was a fun scroll for us to collaborate on, because Cezillia, Nataliia and I have worked together for other ...er...  victims.. in the past, and Nataliia also used to be the Signet, so there was a lovely symmetry in
2 comments
Read more

August 30, 2021
[ Additional Photos ] Siddham!  Success to you! Victorious is the race of Eastern Kings, and long the line of its forebearers; 105 generations of Kings.  Grandparents, Ozur, bringer of the rain, and Fortune of the 1,000 blessings, Mother Margarita, stronger than an iron lotus, who birthed twin tigers of valor, Tindal and Alberic, who reign wisely during an epoch of peace.  They honor, address and command all who have gathered together, nobility, kingdom ministers, advisors, governors of regions, as well as servants of the king, to know that a court barony is to be given to Pakshalika Kananbala.  She is worthy to be rewarded as an example for good people, possessing a personal appearance that is commended, having an undisturbed mind, and versed in the three Vedas. Given by the Kings on the occasion of Their Court, in the time of the new moon during the summer heat, AS 56, consisting of a village near Concordia of the Snows, and a great field of puti-grass flanked on all sides with man
Post a Comment
Read more

September 23, 2020
In my mundane life I am a member of the Business Architecture Guild, currently working for an IT Enterprise Architecture department, practicing Business Architecture, and studying for my Business Architecture certification exam.  Business Architecture is a discipline that allows the practitioners to abstract an enterprise, and the business ecosystem in which it operates, in order to allow the managers of the enterprise to think about business in a non operational/strategic way. It is a communication and analytical framework for translating strategy into actionable initiatives.  In my elevator speech to C-Suite folks I say that practicing BA is like developing the network diagram you see hanging on the wall in an IT Architecture Department, only it represents the business, not the technology. A completed business architecture are the blueprints of the business; a map of concepts, definitions and models that describe how an organization creates value for its stakeholders.  As I write thi
Post a Comment
Read more