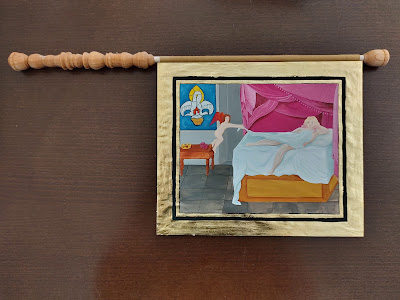 Without running on in poetical fashion,

without using hyperbolic figures of speech,

which are too clearly courtier’s flattery,

we should turn our attention to

praising Fortune Sancte Keyne, the one and only

wonder and miracle of nature,

the high ruler of the sea,

without equivalent or peer in the world.

In her the Crowns of the East take pleasure

in elevating her into the secure, eternal nest

of the Pelican, an Order which had been incomplete.

Done this day anno societatis LVI, at the Aisles of March

by the great good wisdom of Ioannes II & Honig II

The words for this are based on the writing of courtesan and poet Veronica Franco.

The recipient of this Pelican is Countess Fortune Sancte Keyne, whose persona is an Italian Courtesan.  She is a member of the Knowne World Courtesan's Guild and hosts a regular book club called “sex book club” where the participants read period texts and discuss period perceptions of sex, gender and sexuality. Fortune, as she herself says, is “Extra”, and so when I found the Veronica Franco poem below and how it praises the East Kingdom, , I knew I needed to crib something almost directly from the poet herself.  So I did.

The poem was inscribed on one side of an Italian fan. The fan was based on an extant example that currently lives in the Fan Museum Lady Collette d’Avignon contacted the museum, and they sent over high resolution images for us to study.  Baronnes Marieta Charay turned the wood handle for the fan.  Colette painted the Courtesan on one side and did the goldwork on both sides, and Duchess Thyra Eiriksdottir did the calligraphy and the assembling of the final fan.

From the translation of Capitolo 12, Pg 127, In Which Franco Advises the Poet To Write Praise of Venice

“Without running on in poetical fashion,

without using hyperbolic figures of speech,

which are too clearly obvious lies,

to praising Venice, the one and only

miracle and wonder of nature.

This high ruler of the sea,

without equivalent or peer in the world,

this is what you should have praised,

this gentle land in which you were born,

“In her the King of heaven took pleasure

in founding the secure, eternal nest

of his faith, which elsewhere lay oppressed,

and for his own delight he placed on this shore

all the beauty and sweetness

that is most acclaimed and praised on earth”

“Looking at the sky from one side other the other,

we see that the sun movies all the way through it,

yet we still esteem most highly the east:

for here Phoebus, as if from his source,

loses his divine ray when he desires

to open up the day for mortal beings:”

Popular posts from this blog

March 30, 2021
And so she navigated to our shore,  Fair winds had brought her safely to the East, She’d carried brushes, paints and clever lore, With Winston, truest friend and feline beast. Then once she’d found a land with opened doors, She made, for friends and Kings, her art into a feast. This is the land for which she’d ever longed; The sweetness of a home where she belonged. Thus, at the Sixth Ethereal Court of the Eastern Consuls of the East, Tindal and Alberic, do induct Cezilia Raposa into our Order of the Silver Brooch.   ---------- This is a scroll text for one of my dearest friends, Cezillia Raposa.  The scroll was illuminated by Mistress Nataliia and the caligraphy was by Baroness Faeillin, who has since become the Signet of all the Eastern Scribes (a kingdom level job).  This was a fun scroll for us to collaborate on, because Cezillia, Nataliia and I have worked together for other ...er...  victims.. in the past, and Nataliia also used to be the Signet, so there was a lovely symmetry in
2 comments
Read more

August 30, 2021
[ Additional Photos ] Siddham!  Success to you! Victorious is the race of Eastern Kings, and long the line of its forebearers; 105 generations of Kings.  Grandparents, Ozur, bringer of the rain, and Fortune of the 1,000 blessings, Mother Margarita, stronger than an iron lotus, who birthed twin tigers of valor, Tindal and Alberic, who reign wisely during an epoch of peace.  They honor, address and command all who have gathered together, nobility, kingdom ministers, advisors, governors of regions, as well as servants of the king, to know that a court barony is to be given to Pakshalika Kananbala.  She is worthy to be rewarded as an example for good people, possessing a personal appearance that is commended, having an undisturbed mind, and versed in the three Vedas. Given by the Kings on the occasion of Their Court, in the time of the new moon during the summer heat, AS 56, consisting of a village near Concordia of the Snows, and a great field of puti-grass flanked on all sides with man
Post a Comment
Read more

September 23, 2020
In my mundane life I am a member of the Business Architecture Guild, currently working for an IT Enterprise Architecture department, practicing Business Architecture, and studying for my Business Architecture certification exam.  Business Architecture is a discipline that allows the practitioners to abstract an enterprise, and the business ecosystem in which it operates, in order to allow the managers of the enterprise to think about business in a non operational/strategic way. It is a communication and analytical framework for translating strategy into actionable initiatives.  In my elevator speech to C-Suite folks I say that practicing BA is like developing the network diagram you see hanging on the wall in an IT Architecture Department, only it represents the business, not the technology. A completed business architecture are the blueprints of the business; a map of concepts, definitions and models that describe how an organization creates value for its stakeholders.  As I write thi
Post a Comment
Read more